The Biggest Lie Under The Sun

Going Down to Sing in Texas (Iris DeMent) -- Chris Donohue

It's not easy to record a long song that has no chorus or bridge, but simply goes verse to verse to verse. Or at least it's not easy to record such a song and make it engaging for the duration. It takes lyrical and musical excellence. The artist who has done it best might be Bob Dylan, with "Desolation Row" (11:21), "Lily, Rosemary and the Jack of Hearts" (8:51) and "Highlands" (16:31) as three notable examples. Most recently, "Murder Most Foul" clocked in at 16:56.
Another song released in 2020 shares with "Murder Most Foul" a few things besides length (though it's "only" 9:21). Iris DeMent's "Going Down to Sing in Texas" also features a prominent piano, a singer with a distinctive voice, and evocative commentary on America. Similar to many of Dylan's long songs, DeMent's recording is backed by an excellent ensemble of musicians that creates an irresistible groove to carry the listener along.
One of the musicians on "Going Down to Sing in Texas" is bassist Chris Donohue. Chris resume is impressive and worth checking out here. He has played with musicians across various genres, from Emmylou Harris to Robert Plant, Elvis Costello to Pete Seeger to Larry Carlton.

Chris Donohue: On most of the songs we recorded during those sessions with Iris, I used my late-19th century Tyrolean contrabass (double bass).

Many of Iris' piano parts feature a "stride" approach in her left hand, which creates more rhythm and a fuller sound when she is performing solo.

When layered with a busy left-hand piano part, the round, dark frequency profile of the double bass can still be heard and "felt" without competing with the more expansive frequency range of the piano's middle to lower registers.

My Tyrolean bass is a particularly wonderful instrument to record with as it has a very warm, focused low-end and exceptional clarity in a mix. I'm very lucky to have found it!
2 - How did you learn the song? Did Iris send you a demo, play it solo for you and others on the track in the studio, or go Bob Dylan style where she just started playing the piano and you all hopped on for the ride?

CD: Iris played the song for us for the first time in the studio that day. I made a quick chord chart that was copied and passed around, and I believe we only played one or two takes before having a listen and settling on the one we all liked the best.

3 - This song rolls along for nine minutes. Does a song being that long influence how you approach your approach to the bass part?

CD: I'm always mindful of a song's dynamic arc when considering a bass part prior to recording, but in this case our rhythm section's task was very straightforward: maintain a solid, understated groove from which she could speak her unvarnished truth.

4 - In addition to being a session musician, you are a producer, music supervisor and songwriter. Did you have any additional responsibilities with "Going Down" or was it strictly a bass-playing gig?

CD: I was there that day as a bassist and a friend!
5 - The proceeds from the recording are going to food banks and the Poor People's Campaign. The lyrics are a commentary on the modern America. How important were those aspects to your participation?

CD: It is always a more meaningful musical experience when we know our projects will help support the well-being of others. Gestures of this type come naturally to Iris - she has a heart as big as the world.
6 - It sounds like it was recorded live with all the musicians playing together. Was it, or did you lay down your track individually?

CD: We recorded the song live in complete takes.
7 - "Going Down" sounds deceptively organic as if it spring forth fully formed. But were there other takes where you played a different bass part and/or where Iris took an entirely different approach to the style and tone?

CD: Experimenting with different bass approaches wasn't necessary - as you suggest, this song was basically complete when she presented it to us in the studio. 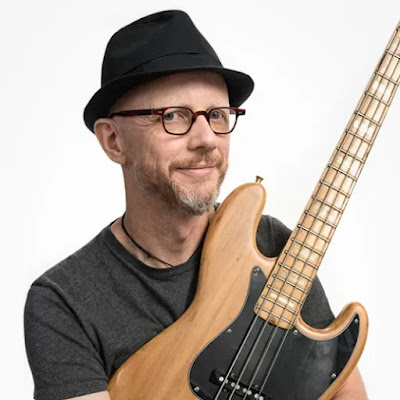