Where No Doctor Can Relieve Me


While on a long drive recently, I stumbled across a compelling interview on NPR.  The fascinating fellow telling tales of rock and roll turned out to be James Fearnley, accordion player for and founding member of The Pogues.  It turns out that earlier this year his book "Here Comes Everybody: The Story of the Pogues" was published.  Believe me, if you heard the interview, you wanted to get the book as soon as possible.

I don't recall the first time I heard the Pogues, but very few people I knew were aware of the band. They were much bigger in the UK than they were in America.  But I was drawn to their unique blend of rock, celtic, punk and world music.  Their recordings from the late 1980s and early '90s have held up very well as a result of following their own muse and incorporating traditional elements, rather than chasing whatever sound was au courant.

I reached out to James and he kindly agreed to answer my questions.  The hard part was picking which song would be the subject.  "Fairytale of NY" gradually became a favorite of the musically hip here in the US; it's a Christmas song and this is the holiday season; and I find the song completely amazing even after many hundreds of listens.  But it felt like well-trod ground.

So I chose "If I Should Fall From Grace With God," the single that followed "Fairytale," for its mix of infectuous music and dark lyrics.  Take a listen; the Q+A follows.

IF I SHOULD FALL FROM GRACE WITH GOD - THE POGUES

1 - Do you recall your impression of "If I Should Fall From Grace With God" in whatever state it was in when Shane (McGowan) first played it for you? 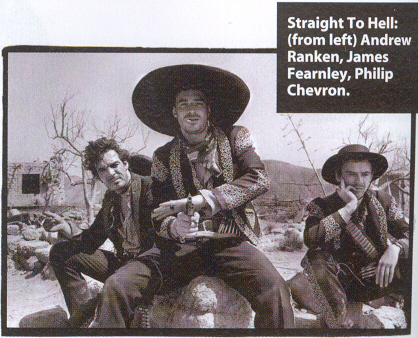 James Fearnley:  It was during rehearsals in January 1987 that I first heard ‘If I Should Fall From Grace With God’, along with ‘Rake at the Gates of Hell’, both of which he would probably have written anyway, but each earmarked for inclusion in the soundtrack for Alex Cox’s film, ‘Straight To Hell’, which had been shot, in Spain, the previous summer.

Both songs, musically speaking - the way we went about them anyway - relied on a kind of propulsive, swampy (aptly enough for the choruses of ‘If I Should Fall From Grace With God’, with their images of rivers and mud), Mississipi Delta shuffle, with elements of Cajun music, even though the band hadn’t actually visited the South at that time.

Both songs seemed fairly complete by the time Shane introduced them to us, structurally. I had always enjoyed the powerful statement of a melody which could basically stand alone, reiterated in the middle, and as a finale to the song, following the sort of template the Pogues, in conjunction with Shane’s songwriting, had developed in the course of the previous couple of years, and as early as ‘Streams of Whiskey’ and ‘The Dark Streets of London’.

I’ve written about the opening melody of ‘If I Should Fall From Grace With God’ in ‘Here Comes Everybody’, and how it bore similarities, for me, to ‘The Bonny Banks of Loch Lomond’. I remember adoring the melody - it’s pentatonic scale expansive and ancient, and carrying with it the theme, as in ’The Bonny Banks of Loch Lomond’, of the proximity of death. I wouldn’t have acknowledged, at the time, the narrator’s beseeching ‘Let me go, let me go’, to have been particularly significant, as such appeals became more urgent a couple of years later.

2 - You played a variety of instruments on the IISFFGWG album - grand piano on "Fairytale of New York," a mandolin, a dulcimer which you hammered with teaspoons, etc.  Did you play anything in addition to accordion on the title track?

JF:  Recording studios have always been a toy box for me, particularly during the recording of 'If I Should Fall From Grace With God’, with Steve Lillywhite in May 1987, and particularly on ‘Fiesta’, when it came to replicating gunshots by means of my mouth, among other things. A few years before, I’d spent quite a long period listening to Spike Jones and His City Slickers. I used to know the drummer from a band called the Vibrators. We’d get the saucepans and lids out from my kitchen, and a couple of spoons each, and 'play' along with dance bands from the 1930s - Ray Noble and Al Bowlly were favourites.

When it came time to record the demos for a large part of what turned out to be the album 'If I Should Fall From Grace With God’ (’The Terry Woods Solo Album’, which, for ‘contractual reasons’ had to be kept secret), for ‘Fiesta’ there were metal ashtrays and other similar percussion instruments around the penthouse studio at Abbey Road. Otherwise, I remember sawing away at a cello on ‘Turkish Song of the Damned’, and being summoned to the studio by Lillywhite to add a bit of ‘sizzle’ to ‘Bottle of Smoke’, by means of a cymbal laid flat on the floor and beating out triplets on it with sticks.

I think the hammered dulcimer came later, once I’d realised there was an instrument that sounded better than laying a mandolin on my lap, damping off the strings I didn’t want by means of cardboard stuck between them, and laying into it with teaspoons. The break in ‘Haunted’ (to Philip Chevron’s chagrin, because I rather think he would have liked the opportunity to play a guitar solo), which we recorded a year earlier, is done that way.

3 - Why did the band choose to name the album after this track?

JF:  Frank Murray, our manager, was vexed that we hadn’t come up with an album title. ‘Red Roses For Me’ had come so immediately and simply. I wonder if Shane knew all along what he wanted the title of our first album to be. ‘Rum Sodomy and the Lash’ became obvious, from Andrew Ranken’s navy stories - though I’m glad the album wasn’t called ‘Dance of the Flaming Arseholes’, which was one of Andrew’s most memorable stories. ‘If I Should Fall From Grace With God’ proved to be not so easy. Nothing ever spontaneously raised its head. Murray, with his back against some sort of wall, burst into our rehearsal, wanting an album title. Shane just shouted back "‘If I Should Fall From Grace With God’!”  to make him go away. 4 - IISFFGWG was used in a 2010 Subaru commercial about hockey moms.  Could you ever have envisioned this back in 1988?

JF:  No. Neither could Iggy Pop have envisioned ‘Lust for Life’ in a commercial for Royal Caribbean cruises.

5 - An earlier, slower version of IISFFGWG was released on the soundtrack for "Straight to Hell" in 1987.  Why did the band decide to revisit/redo the song?

6 - How disappointed were you, or not, when IISFFGWG peaked at #58 in the UK after the previous single, "Fairytale of NY," was a #2 hit? 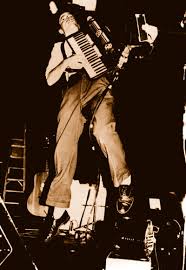 7 - What is your most memorable live performance of IISFFGWG?

JF:  All performances of ‘If I Should Fall From Grace With God’ have tended to run into one collective one. It has been a favourite of mine to play, since we first started playing it. It provides me one of the first opportunities in the set to throw the bass end of the accordion skyward and drag the keyboard end down towards me for the last chord. If there’s any performance or series of performances I particularly remember, they were for the video we recorded at the Town and Country in Kentish Town during the week of St Patrick’s Day 1988. Philip Chevron was masterful in front of the cameras. I had no idea what to do and learned a lot from him. Not much of a memory, it’s true, since it forms part of that residency we had, and in our stamping ground, in our home town, at the end of a tour of the UK, not long after coming back from the other side of the world after our first tour of Australia. It was good to be back at home.


For other interviews James has done, see the links at this page on his website.
Posted by Joe at 7:11 PM No comments: