It Is Not Real, It Does Not Grow

Many summer camps and Girl Scout troops know this song:

What they often don't seem to know is who wrote it.  In fact, most assume it's a folk song, handed down over so many years that no one remembers where it originated.  It's time to correct that misconception. 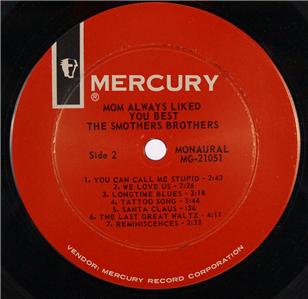 In fact, "Tattoo Song" debuted in 1965 on a best-selling album by the Smothers Brothers, "Mom Always Liked You Best."  Like most of the duo's cuts, it combined humor and music.


So who wrote it?  A man who has been awarded an Emmy and two Grammys.  A man who is an accomplished guitarist, comedian, artist, poet and author.  His name is Mason Williams, and he is best known for ""Classical Gas," a huge hit in 1968 whose popularity has never waned in the decades since its release.

Williams received his two Grammy Awards for composing and performing "Classical Gas."  At the time, he was head writer for the Smothers Brothers Comedy Hour, a groundbreaking, controversial and popular television variety show.  For this work, he landed his Emmy,

A few years earlier, just before he wrote "Tattoo Song," Williams released an album called "Them Poems," a collection of humorous short pieces he sung or recited before a live audience.  That same year, the Kingston Trio ("Tom Dooley," "Charlie and the MTA,") included a few of these tunes on their live album:

"Tattoo Song" is seemingly just one of many short comedic songs written by Williams at a time when he was busy with a a variety of successful creative endeavors, one which could have gently faded into the past.  Instead, it has taken on a life of its own, inspiring countless numbers of camp counselors to get a daisy tattooed on her or his toe.

I caught up with Williams recently to quiz him about a song for which he gets so little credit.


Did you or someone you know have a daisy tattoo...

...or did something else inspire the lyrics?

MW: Song to sing after getting tattoo.

Did you write the song specifically for the Smothers Brothers?

On the recording, the brothers do their usual comedic banter before they play the actual song. Given that you were later the head writer for their television series, were you involved in writing this banter or just the song itself?

MW: Could be either, don't remember.

It appears you've never recorded a version of the song.  Was it ever part of your live act?

You've written a lot of terrific music.  And thoughts on why this particular tune took on a new life as a popular song for Girl Scouts and summer camp kids?

You and the artist Ed Ruscha were roommates in Los Angeles in 1964; your website says you composed Tattoo Song on 9/12/64.  Was there much creative interaction/inspiration between you two or were you both off in your own artistic worlds?

MW: We went on DADA dates.

When you wrote the song, did you foresee the day when having a tattoo would be as mainstream as it has become?

MW: Nope, tattoos were basically the realm of sailors & criminals.